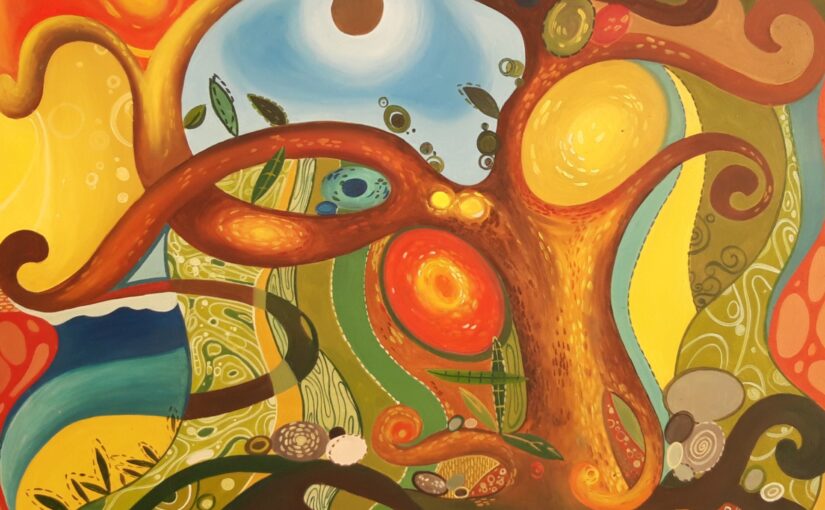 She walked barefoot with her toes wrapped around the moss so as not to slip. She had appeared with the full moon between the mouths of the geysers, with the clouds of steam warming her naked and wounded body on that cold night so far from day. It was not dirty with blood and amniotic fluid, but with soil, humus, and filaments of roots: the earth had given birth to her. So they said.
That she was the victim of trafficking in women destined for prostitution, fled from a nearby port, as the authorities tried to establish, in the end, nobody cared.

For all, she became Proserpina.

Proserpina escaped from the Underworld, from Hades, who had wanted her young body with arrogance.

Hannah heard the screams of terror echoing in the caves and tried to wake up looking for oxygen. But it was useless to fight: he curled up in bed and fell back into limbo.

No. Year zero. Yes, year zero. It was decided that humanity would begin counting again from 2029. Year zero. The advent was no longer December 25 in a manger but March 21 in an uncontaminated land. After the storms’ fury, the eruption of volcanoes, the tremor of the earth, the rising of the seas, rampant humanity was on its knees. And Proserpina had brought spring. It didn’t matter that March 21, 2029, wasn’t her birthday, what womb gave birth to her, who knows where who knows how. All, humble and powerful, bowed their heads before her.
As her mother must have taught her, Proserpina offered seeds to those who gave her food, gave cuttings to those who welcomed her, took root to anchor the earth, and then walked towards the sun with wildflowers in her arms.

Hannah lay sideways on the bed, deep in a Northern Lights sleep as the first light of dawn brushed her pillow.

Proserpina was the spring of the world.

After the men’s ice age, she, a woman, had come to guide the planet through the global warming era, which, after all, had already forged, like the succession of night and day, that living being called Earth. As already in the distant past, traces of marine organisms would have remained etched in the rocks of the highest mountain peaks in the distant future. After all, who could say which was the hottest point before the turning point towards a new ice age? Were there perhaps summers and winters, inscrutable to us, of universes or galaxies?

Hannah heard the alarm bell in the distance: there was no time left.

multiplied throughout the world, from door to door, from post to post, from mother to daughter. The crystal roof of the patriarchy was shattered by the thorn of a rose. Women guided humanity according to matrilineal, earthly principles. No more trafficking of women or raw materials. No more rapes of bodies and lands. What was suitable for little girls was good for the world. And the next ice age became a distant thought.

Hannah gave up and turned off the alarm clock: 8am on February 17, 2029. Outside, the weather was gray. She got up and drank coffee: on the news, the latest femicide, the usual politician arrested, the estimate of the dead after the collapse of the bridge, the appeal of the earthquake victims.
With slight anxiety, without waiting for the first customer, Hannah interpreted her runes, questioned the tarot several times, checked the astral conjuncture: the auspices were propitious. Proserpina hadn’t been just a dream.

A crime story in a matriarchal society

Utopia? Dystopia? It’s up to you to decide!
The Right World is being published in English these days in the major ebook stores! Find it and buy it or read the preview

The Virginia Woolf Project to give women a voice

Any cookies that may not be particularly necessary for the website to function and is used specifically to collect user personal data via analytics, ads, other embedded contents are termed as non-necessary cookies. It is mandatory to procure user consent prior to running these cookies on your website.